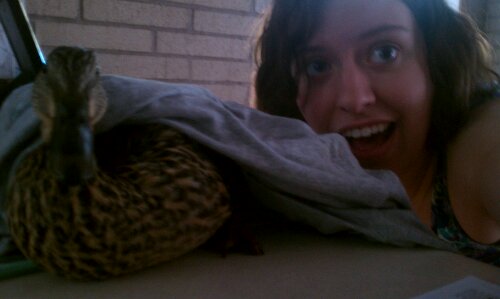 It started off as an innocently boring day. I was covering for the lady who normally runs the park gift shop, which is a pretty sweet gig because it’s just you and the conservatory flowers and a nice thunderstorm-y smell and all the Facebook you can stand and no judgement if you want to eat an entire bag of yogurt pretzels.

Earlier in the morning, one of the horticulturists, who is this incredibly endearing woman named Vickie, had stopped in and told me as an anecdote that some woman had called and complained that she had been witness to a DUCK ATTACK in the Village of East Davenport, and (this line of thought is surmised because I’m not an idiot) because we are a park where there are ducks, clearly we were the ones to call.

Vickie was really nice about it and explained to the woman that no, ducks are in mating season right now and unfortunate but true, duck mating is more like “violent duck rape”. The woman was furious and hung up with a cryptic “Fine, if you’re not going to do anything about this, I WILL”.

Fast-forward to a couple hours later, when Vickie comes to tell me that this same woman had just rolled up with a duck. In her car. Apparently, the woman had decided to “rescue” the duck she had seen being attacked, and basically took it from where she found it and brought it with her to VanderVeer because, you know, maybe only the rape ducks hang out in the Village.

So what OF COURSE winds up happening is that in a park with a predominately male duck population, a new female gets introduced and so all the ducks go apeshit BECAUSE IT’S MATING SEASON and she promptly gets duck-raped. Again.

So the woman comes into the office to complain that we aren’t doing anything about the violent duck molestation outside that is happening WHERE CHILDREN CAN SEE!

Again, it is explained to her that sorry, that’s just how ducks roll, there’s nothing we can really do about it.

The woman storms out and we think the story is done. We think.

It should be noted here that ducks, when they are mating, have a tendency to pull out feathers. It’s not pretty and there there is a little, tiny bit of blood, but it’s not really harmful and aside from looking shitty, it really doesn’t matter.

So of course, the duck the woman tried to rescue comes over now looking much more worse for the wear and is missing a big chunk of feathers on her neck.

The woman FREAKS THE HELL OUT and comes running into the office about how see, see, the ducks are MATING, they are just being mean and now this duck is going to die and WHY AREN’T WE DOING ANYTHING?

Vickie, being concerned about animals and nature in general, goes out to look at the duck to make sure it’s okay, and checks it out, realizes that it’s just missing a few feathers and assures the woman that look, this is just what happens with ducks. We’re sorry this is distasteful to you, but there is really nothing we can do, we’re parks employees, not animal control or vets.

Then is gets weird.
Well, weirder.

So this lady decides again, apparently, that if we aren’t going to do anything, as official president and secretary of the Duck Defenders, it’s her duty to save the duck.So she just picks up the duck and leaves.

Straight up ducknaps this poor bird who’s already been duck-raped twice and now has this idiot chasing her around. I feel bad for the duck.

Poor Vickie, who has been dealing with this all day, comes in to call the cops, because mallard ducks are protected by state law, so basically this woman just committed a felony and now we have to bring the cops in to it.

The cops get called, and it turns out the woman has been calling the COPS all day about the duck as well, so they were fed up with this woman as well. Unfortunately, we didn’t really have a good description of her car or anything so we thought she was just going to get away with it. So Vickie goes in the back to call the nature guy in the parks office to let him know what’s happening and I resume my post, and then–

“Excuse me, I’m sorry to bother you, but there is a bloody duck in the middle of the kid’s playground”.

We’re not exactly sure what happened, but somehow, the duck wound up on the playground. We think the woman probably got bit and gave up, but who knows.

I head out to the playground with the mom who came to tell us, and sure enough, there a rather sad and destitute looking duck surrounded by a circle of small, weeping children who are helping the situation by poking the duck with a stick.

I tell the kids that the duck is hurt and that I’m an Animal Police Officer (thanks, four year olds’ lack of suspicion!) and that they have to help me on my Special Mission by all being really, really quiet and making a biiiiiiiiiiig line at the other end of the playground.

Once the kids were out of my hair, I take off my shirt (I had on a tank top, we’re not getting sexy in front of the kids) and use it to coax the duck off of the playground and into some tall grass by the pond.

Just as I’m congratulating myself on a job well done, the duck collapses. Just goes “qwnackughhh” and keels over. Great, now it’s my fault I killed the stupid duck and the conservation police are going to come arrest me. So I kind of awkwardly look around for witnesses and poke the duck (GENTLY. I poked it GENTLY). It kind of shuffles around but I can tell something’s off, so I decide to try and coax it closer to the pond. I grab my shirt again and have it spread out, but instead of going where I want it to, the duck basically jumps onto my shirt and sits there.

Stupid duck, go to the pond!

Nope. It became abundantly clear this duck was not going anywhere. Just as I am about to call it a day, I hear a very familiar voice in the distance say “See! That’s the duck I told you about”.

I look back and see Duck Defender surrounded by a group of moms and she’s yelling about how terrible we all are and how she’s going to just have to save the duck herself.

Now, normally I will let idiots be idiots, because really, they’re only hurting themselves. However, this poor duck has been through enough today, it might be actually injured at this point, who knows, and the last thing the poor animal needs is some crazy woman manhandling it some more and taking it to another park.

I decide to try and at least get the duck up and walking towards the pond so maybe it will swim away so Duck Defender can’t use any more of her Duck Justice, but the duck collapses again. I don’t know much about ducks and Jake wasn’t around, so I figured, well, this day has been stupid enough already, let’s make it interesting.

I carefully wrap the poor duck in my shirt and pick it up. The duck was docile and didn’t struggle or make to bite me, so I just kind of carried it to my office.

So I get back to my office and I realize…I’ve got a fucking duck in my office, what the hell do I do now? 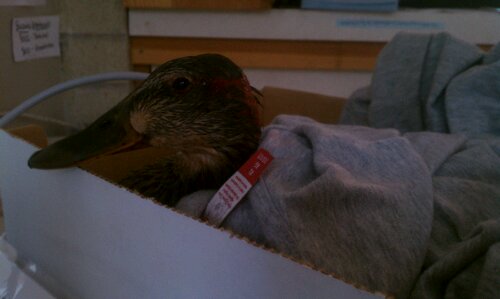 I call Vickie and she comes out of the greenhouse to check out the duck, and we construct an impromptu duck bed out of a plastic bin and some paper, so the duck is just kind of chilling on my desk at this point.

I call Animal Control, and the officer on the phone asks me about how the bird is acting and what its injuries look like, and he tells me to just let the duck chill for awhile, and if it can walk on its own, it should be fine.

So I take some pictures of the duck, feed it some donuts, generally enjoy the hilarity of the situation, and when it seems like Amy DuckPond (official duck name) was feeling better, I carry the bin carefully to the door to set her down so she can be free, when:

Some well-meaning and easily excitable patron has just wandered into the gift shop and sees me with a duck, and her exclamation causes Amy DuckPond to FREAK OUT.

So now there’s a duck lose in the gift shop.

After about 5 minutes of me waving my arms around like an idiot trying to get this stupid duck out of the gift shop, I finally get it through the doors, out of the building, across the grass and into the pond.

There’s not really a punchline here. I’ve been trying to figure out if anything particularly hilarious happened afterwards to warrant a sweet punchline, but really all I’ve got is that 10 minutes into my drive home, the Duck Tales theme song shuffled on.

One Reply to “Duck Tales (Or, A PSA on not being an idiot).”

Find What You’re Looking For