I’ve always loved making things. As a kid, I did a lot of crafts, and then, as I got older and started doing theatre, I started getting to use the weird skills I’d picked up over the years to build costumes, sets, paint– that sort of thing.

Today, I made a couple of props for a friend to take pictures with this weekend– it was really fun and I got to test out my new design software, so it was a fun project.

As I was working, I started thinking about how nice it is that I’m “that girl with the costumes” or “that girl who can make things”.

I am usually really bad about finishing projects around the house, so while my humble abode doesn’t really SEEM like a crafty person lives here, I’ve had a lot of really cool opportunities presented to me because of my ability to fashion costumes and props for little-to-no-money in very short amounts of time. I’ve always been the girl who gets called in last minute: “Catie, I need to have a ___________ costume in like, two hours”. And I’m kind of proud of the fact that (pending if Salvation Army is open) I can usually come through. 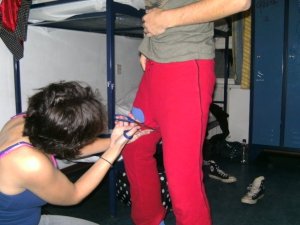 This is me, in Amsterdam, cutting the legs off of a pair of sweatpants to create an impromptu Captain Planet costume. But there’s been stranger things than that…

There was the time the Children’s Museum hired me to play Belle from Beauty and the Beast….

And yes, that is Prince Charming under my skirt. 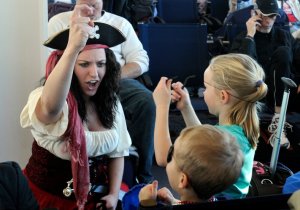 There was the time that a costume I made for a party got re-purposed in an hour after someone playing Anne Frank at an educational tour got really sick and they called me to fill in…(What’s really great about this picture is that my hair is bright pink and purple under the wig– the kids had no idea). Also, I felt kiiiind of offensive the entire time, but it was a really great program with a really great script, and I had a lot of the kids come up to me afterwards and tell me they got a lot out of it. 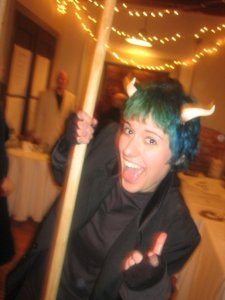 There was the time I entered an online cooking contest and the editor liked my writing (not my recipe, please note) that she got me a job writing for a wedding website for six months.

There was the time I threw together an emergency Elphaba costume to party in Amsterdam.

Jake is actually pretty cool about the whole crafting thing. For instance, I found this awesome shower curtain on the internet. But it was like, $150. F that noise, my friends. So I bought a $6.00 white shower curtain and dug a sharpie out of my purse and did this over an episode of South Park. I’m not going to lie, I’m kind of digging the “inexpensive white shower curtain + sharpie = INFINITE POSSIBILITIES” thing.

Find What You’re Looking For